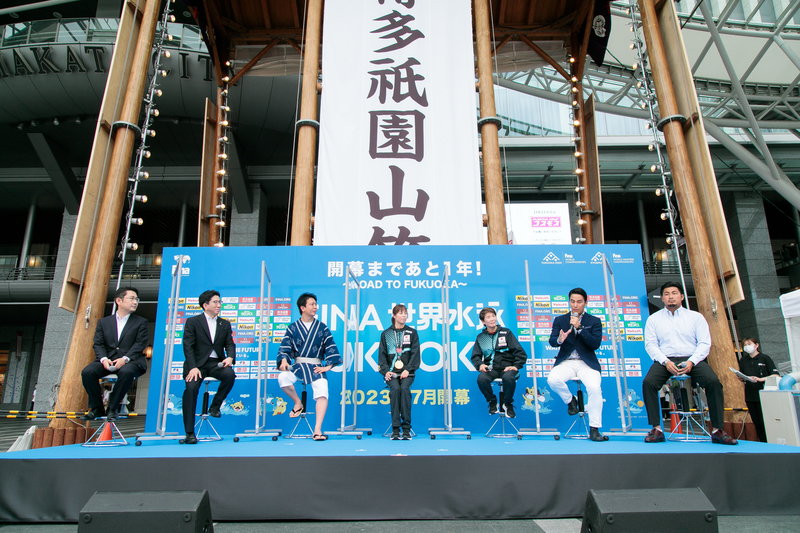 （Picture of the Talk Session）

The event was held at a special stage by the Kazariyama floats in front of Hakata Station, a
centre of Fukuoka and filled with excitement because of the then-ongoing Yamakasa Festival.

Prior to the holding of the event, FINA President Husain Al Musallam provided a message
of gratitude and encouragement towards the athletes, coaches, staff, and city residents.
“I have no doubt that the beautiful city of Fukuoka will be a very special FINA World Championships for everyone involved. I can’t wait to join thousands of fans in the stands, watching the world’s best aquatics athletes compete on the biggest stage.”

Attending the event dressed in a happi coat Fukuoka City Mayor Mr. Takashima shared his
expectations for the holding of the Fukuoka World Championships. “Next Year’s Fukuoka
World Championships will be the next big event after the Olympics, with 500,000 Japanese
spectators coming to Fukuoka to watch the Event, and approximately 4 billion people
watching the Event on the T.V. screen. It would be our honour to welcome many esteemed
guests from around the world for this momentous occasion.” 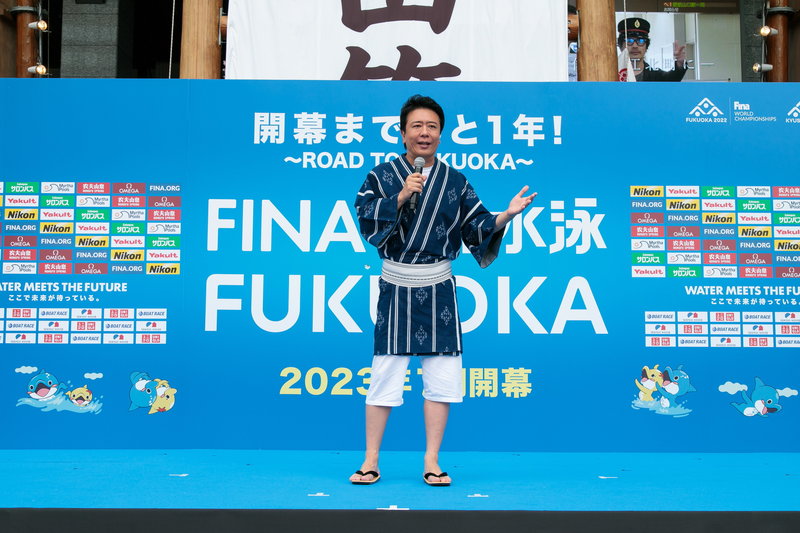 Ms. Inui who became the first Japanese Artistic Swimming Swimmer to claim two gold
medals for solo Artistic Swimming at the Budapest World Championships held in June 2022,
was a little nervous as she shared “Standing in front of everyone like this is a lot more nerve-
racking than swimming. Because when I enter the pool I enter into my own world.”
When asked about the Budapest World Championships, Ms. Inui commented “I was a
little nervous when I first heard about the announcement of the Budapest World Championships to be held this year, but I had been continuously training for the Fukuoka World Championships which was planned to be held in May of this year, so I was fully prepared for Budapest.”Upon hearing Ms. Inui’s comments, Coach Imura revealed key details behind Ms Inui’s decisions following the Tokyo Olympics and leading up to the Budapest World Championships.
“The truth is, she (Ms. Inui) told me herself right after her Tokyo 2020 event ended at the Olympic Village that she was fully satsified in her performances in duet and team routine events and that she wanted to start focusing on her solo events.”
The coach also praised Ms. Inui’s performance stating “I truly had nothing to advise Ms. Inui on, as she was going towards her final performance. This was the first time in my 49 years as a coach that I had nothing to advise or say. It is truly remarkable that she completed what she had set out to do.” 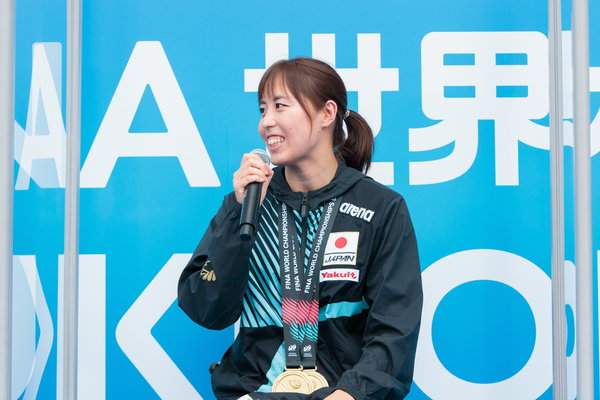 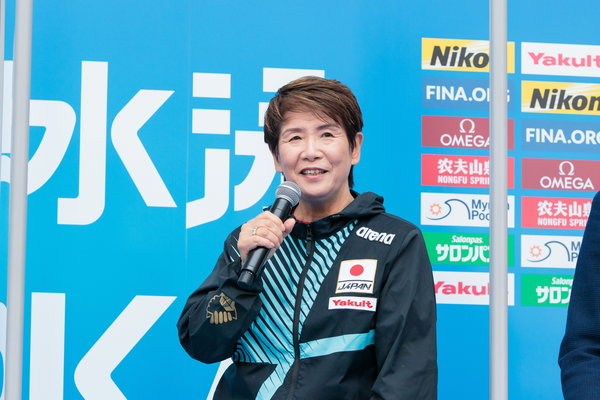 Regarding the performance of the Team Japan’s swimmers, Mr. Matsuda looked back at Budapest 2022 commenting “The Japan delegation had a tough time in the early stages of the Event, but by the end the men’s team were able to claim three medals so they performed well.” Looking towards next years’ Fukuoka World Championships, Mr. Mastuda shared his expectations towards the event saying “I look forward to watching Ms. Rikako Ikee and younger swimmers like Ms. Mio Narita from the women’s team compete next year. From the meaning of passing on the torch to the next generation, these swimmers are very important so please support them in their future races.”
Additionally, Mr. Mastuda commented about Team Japan’s divers saying “The diving team has been growing in strength recently, claiming 3 medals at the Budapest World Championships. These are the first medals won since 21 years ago when Mr. Ken Terauchi medaled at the 2001 Fukuoka World Championships. Because we are entering next year with a good momentum, it looks like the Japan team will be able to provide even better results.”
Former Team Japan Water Polo Captain and Kumamoto City Goodwill Ambassador Mr.
Yusuke Shimizu expounded on the thrill of water polo. “Water Polo is often called the “King
of Sports”, and combines swimming, throwing, and tackling. The amazing thing about Water
Polo is that even spectators watching matches for the first time are able to enjoy the easy to
understand and fierce developments. I would urge you to come to the Water Polo venue at
least once and watch a water polo match.” 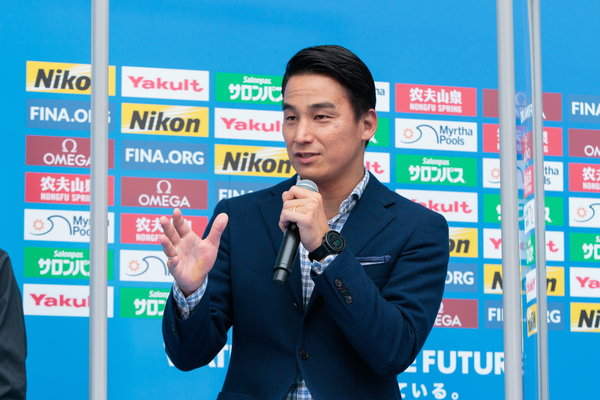 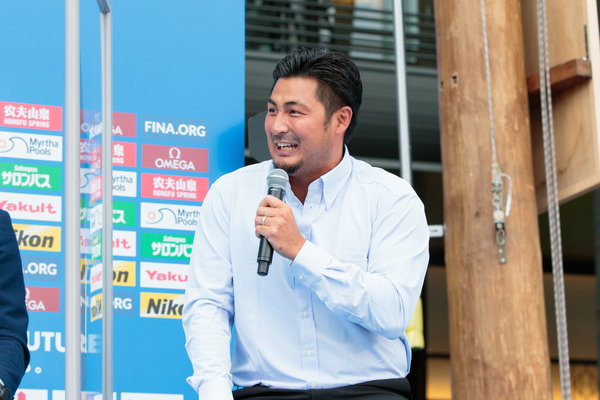 As the subject of the conversation shifted to the 2001 Fukuoka World Championships, Ms.
Inui revealed her resolve about the World Championships. “I first began wanting to win a
medal when I saw the Ms. Tachibana and Ms. Takeda pair at the 2001 Fukuoka World
championships be the first Japanese Artistic Swimming swimmers to win gold. Following that
day, this year I was finally able to earn a medal at my 7th World Championships appearance. I
would be very happy if the Fukuoka World Championships would be the catalyst that would
lead to children pursuing their dreams just like how watching the World Championships
21 years ago lead me to work towards earning a medal.”
Coach Imura looked back at Ms. Tachibana and Ms. Takeda pair’s gold medal 21 years ago, revealing a treasured episode from that time. “That gold medal at the Fukuoka World Championships was the first gold medal in the history of the Japanese Artistic Swimming world. It was a historic moment that would have newspaper extras being sold at the Hakata Station Square. I am truly happy that the World Championships will be held here again at Fukuoka City, a city in which we have such a deep connection with.”
Mr. Matsuda spoke about how he was just barely unable to be selected for Team Japan for the 2001 World Championships. “That year I was a high school senior, but I still remember how disappointed I was to this day. Looking back, that moment led me to begin working harder and I was able to be selected to be a swimmer for the Athens Olympics Japanese Delegation. From Mr. Shimizu’s comment that “While I was a Junior High second-year at that time, I traveled to Fukuoka to watch the matches at the venue. It was a stimulus that would lead me to work harder in my training and aim towards joining the Japan National Water Polo Team”, it can be understood that all the guests viewed Fukuoka 2001 as turning points for their lives. 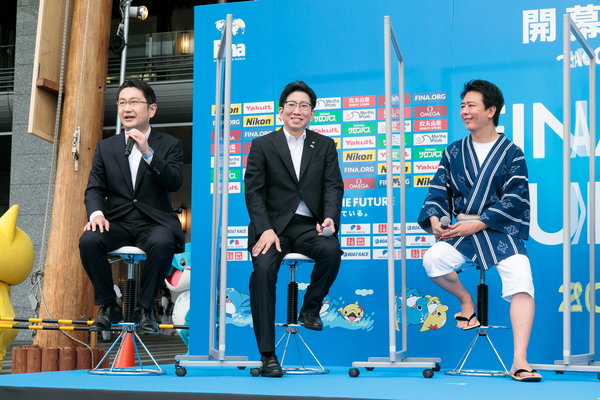 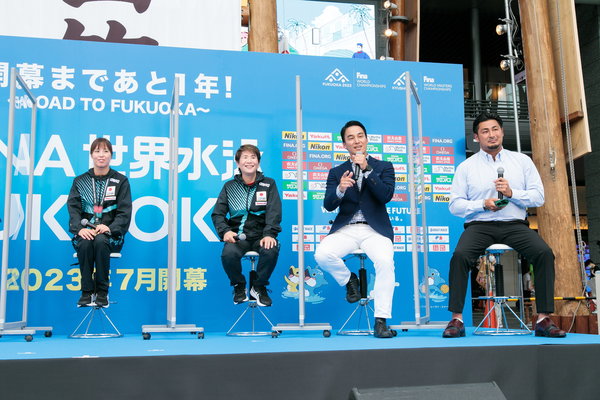 In the event, the FINA World Masters Championships Kyushu which will be held in August 2023 after the July Fukuoka World Championships was introduced, and the Host City Kagoshima City Mayor Mr. Shimozuru and Host City Kumamoto City Deputy Mayor Mr. Nakagaito joined the stage.

Mr. Shimozuru Mayor of Kagoshima City, which will be the Artistic Swimming Host City, spoke about the charm of Kagoshima saying “Kagoshima has many charms including Sweet Potato Shochu, Kurobuta Pork, Mt. Sakurajima, hot springs, and many more. We would like many people to visit Kagoshima and experience the charm of Kagoshima!”
Additionally, Mr. Nakagaito Deputy Mayor of Kumamoto City, the Water Polo Host City, spoke about Kumamoto City. “Kumamoto City has a catchphrase, the “water capital”, and has many delicious food. We are fully prepared to welcome our guests next year, and we eagerly await your arrival.” 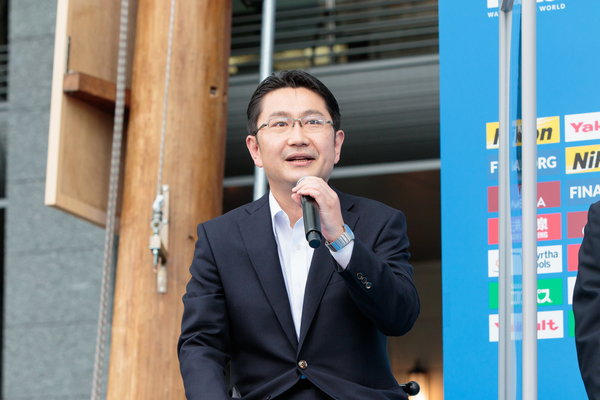 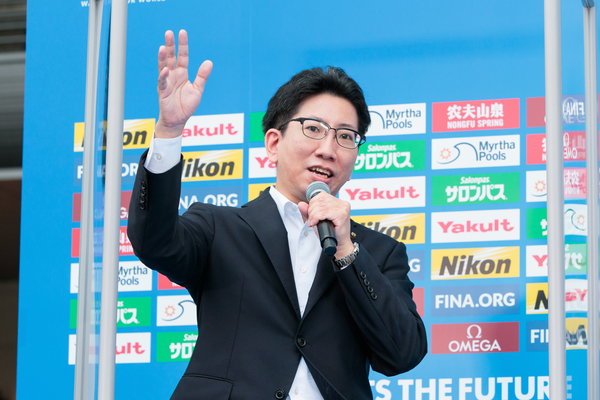 Regarding the charm of Masters, the venue was lively as Coach Imura stated “Masters is also a sport for people who want to enjoy sports. Please come and watch people who are living what it is like to “enjoy sports”, like teams comprising of people in their eighties who are competing or couples competing as duets”, and Mr. Shimizu commented “I do not think there will be another Water Polo international sports event that will be held in my hometown of Kumamoto anytime soon, so I guess that I have no choice but to participate in the Masters Championships (jokingly?).” 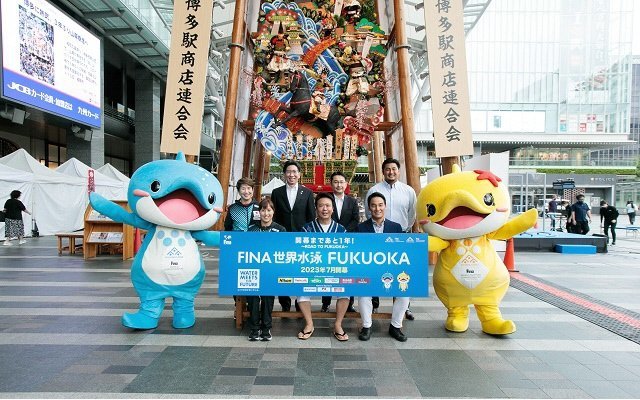